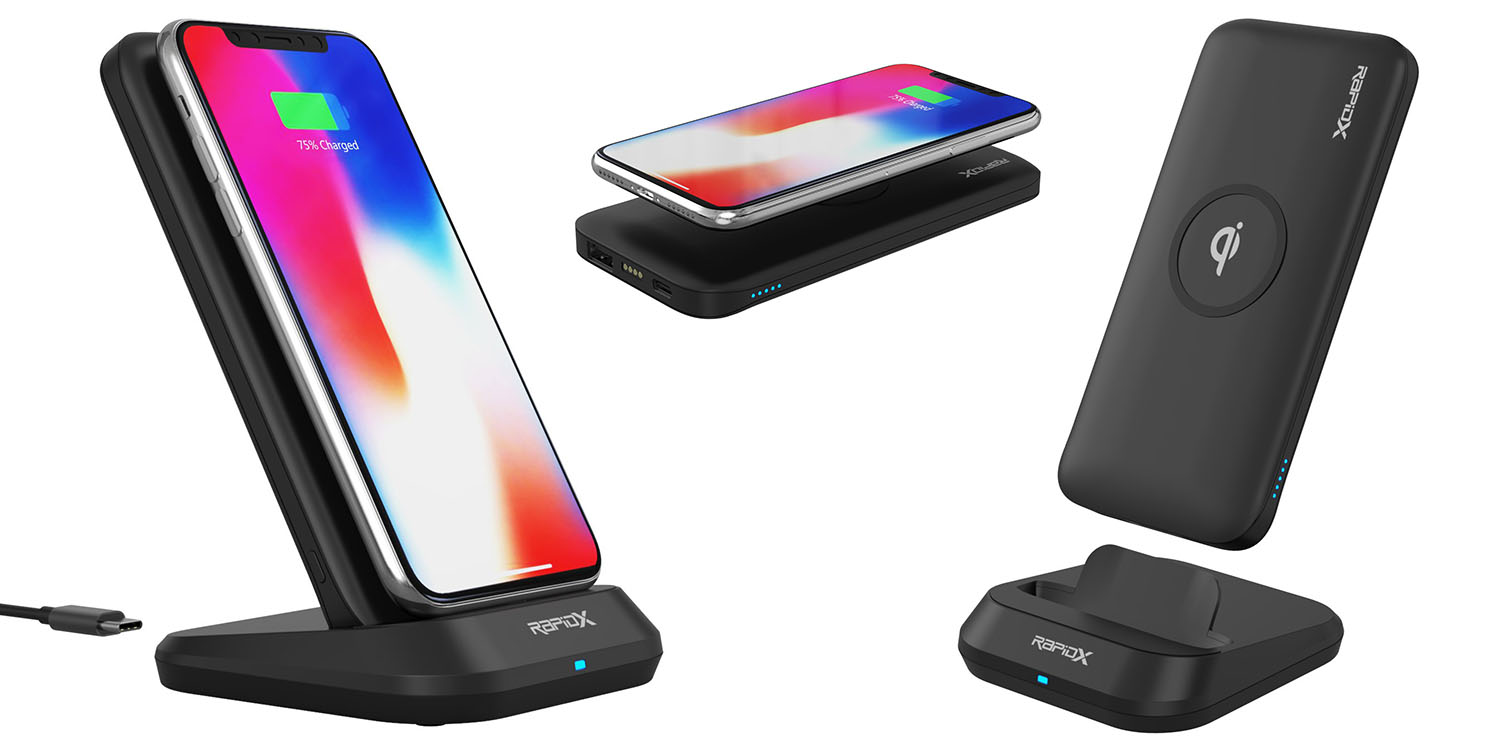 Back in August, we saw the OtterSpot, a wireless charging pad system that offered both tabletop and portable charging. The RapidX MyPort is the same idea, but with a charging stand design rather than a flat pad.

Both devices aim to be the only wireless charger you’ll ever need, providing outlet-powered charging at home and power-bank charging on the move…

The strength of the OtterSpot is the ability to stack the charging pucks to charge more than one at a time.

However, I personally prefer charging stands to pads, as I find it easier to see notifications when the phone is upright, and it’s also easier to briefly interact with the phone – like switching a light on or off in the Home app – without picking up the phone. And with a 10,000mAh power-bank, I’m never going to need more than one.

The MyPort looks very similar to any other wireless charging stand. It’s black plastic, with a semi-rubberized surface. It has a USB-C port in the back, and comes with a USB-C to USB-A cable – but not a charging brick. There’s a white indicator light on the front to show when it’s powered up.

So far, so standard.

The first sign that this is not a normal charging stand is the indicator lights on the side of the sloped support. Four LEDs indicate the charge status of the power-bank, in 25% increments, while a fifth LED at the top indicates the charging status of the phone or bank. Green indicates ready to charge, blue shows that it is charging.

Lift the back from the dock, and you have a portable power-bank. On the bottom are four contact points to charge the unit in the base, and two USB ports, one USB-A, one USB-C.

When using it at home, it’s exactly like any other charging stand. Leave it connected, and just put your phone on the stand to charge. The outlet charges both the power-bank and your phone.

Sensibly, the RapidX MyPort prioritizes your phone. When it’s not 100% charged, it directs all the available power to the phone. Only when your phone is fully charged does it then switch to charging the power-bank.

In practice, however, the bank will almost always be fully-powered as it charges when your phone is not on the stand.

I did find two drawbacks. First, the branding on the power-bank is more prominent than I would like. I prefer branding to be discreet, as it is on the Choetech charging stands I use as standard. Although the Choetech brand name looks prominent in product shots, it’s actually very faded and subtle in appearance. The RapidX branding and logo is also somewhat faded but stands out more than I would ideally like – especially as the writing is sideways when used as a stand.

Second, the wireless charging range. I use a Mujjo wallet case (older review here, iPhone 11 Pro review to follow) with two cards in the back. With my Choetech stands, my iPhone charges quite happily through the case and cards, but with the MyPort, it is rather sensitive to the placement of the cards. Sometimes it charges happily through them, sometimes it doesn’t. With one card, it’s fine.

For mobile use, you have two options: wired or wireless charging. As mentioned, you get two ports, USB-A and USB-C, and can use either one or both together to charge two different devices.

As someone who just bit the bullet and swapped all my USB-A cables for USB-C ones, I’d have preferred two USB-C ports, but this is the more flexible arrangement. Both USB ports support 18W fast-charging.

But the selling point, of course, is that you get wireless charging on the move as well as at home. I found that both a jacket pocket and the phone sleeve of a bag were large enough to accommodate both power-bank and phone – and kept them tightly enough together for wireless charging.

This makes it a fantastically convenient system. At home, charge normally in the stand. When you leave, either pick up just your phone on its own or – if you need more power to see you through the day – take the bank and phone together and slide them into your pocket or bag sleeve to keep the phone charged.

Alternatively, if you’re going to be based mainly in one place while away from home, keep the power-bank separate, and then just put it on your coffee shop table or wherever and place your phone on top to keep it charged.

The MyPort powers down when you remove it from the dock: just press the power button once to switch it on, and long-press it to switch it off.

Finally, the USB-C port also supports two-way power delivery, so you also have the option of charging it from a MacBook, which is a convenient coffee-shop option to keep both bank and phone charged.

The RapidX MyPort costs $79.99. You can get a wired 10,000mAh power-bank for less than half that price. Add in a wireless charging stand, and you’re still well below eighty bucks.

So MyPort only makes sense if you want both a wireless charging stand and a power-bank, and you’re willing to pay a premium for the wireless charging capability and/or the convenience of an all-in-one solution.

But it’s a very neat setup which is completely painless to use, and for that, I personally think it’s worth the money for anyone whose iPhone regularly struggles to make it through the day on one charge.

The RapidX MyPort is available direct from the RapidX website, priced at $79.99.