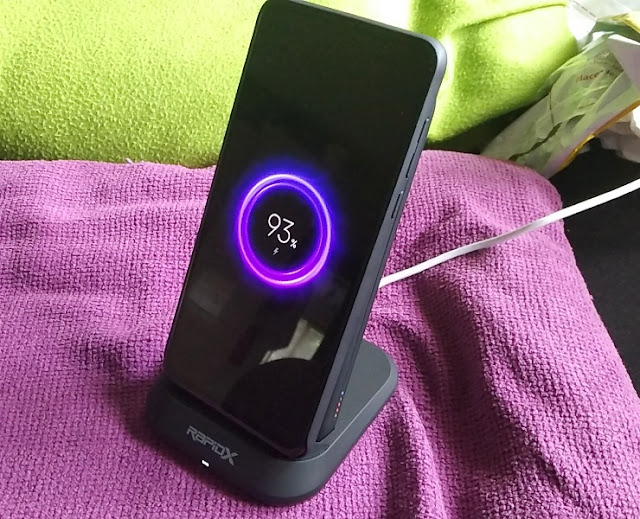 One of the best features a smartphone can offer is the convenience of being able to charge it wirelessly without plugging-in a cable. The basic design of most wireless chargers on the market, it's either the coaster-style or portrait-upright style. 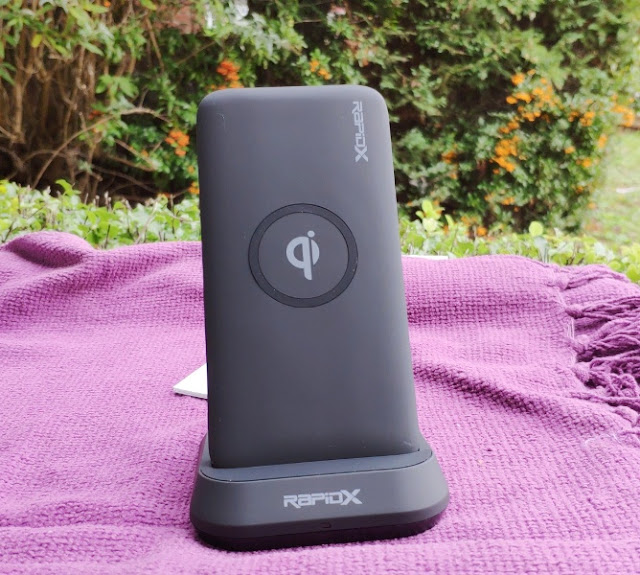 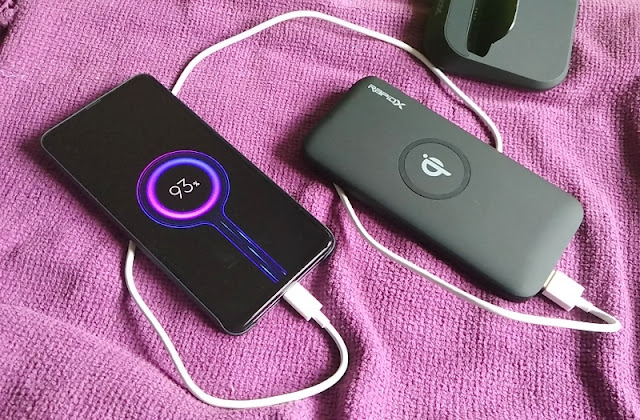 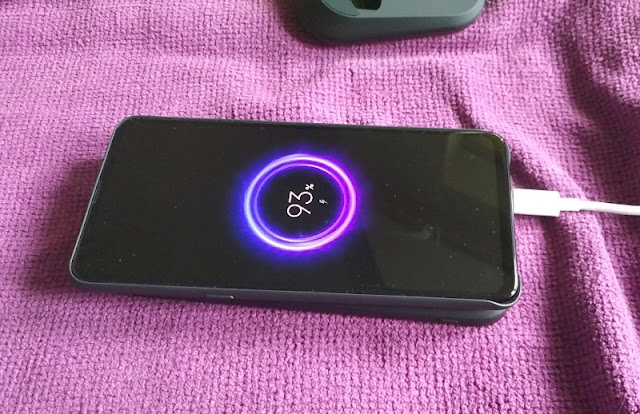 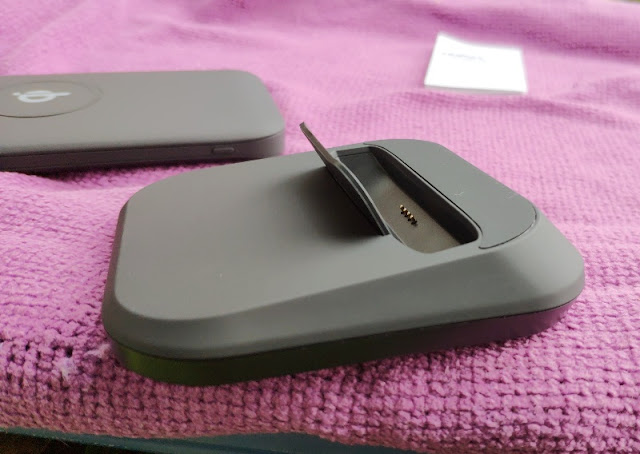 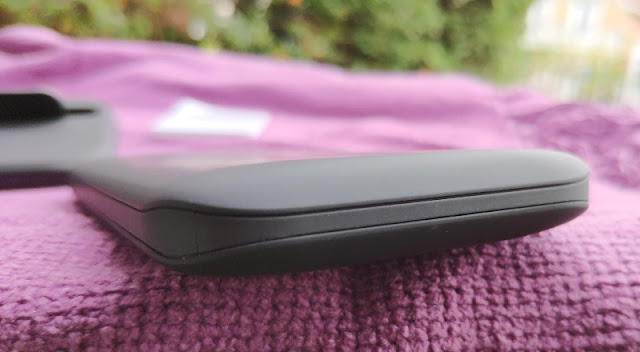 MyPort charging stand features four gold-plated metal prongs, a battery led indicator (on the front) and a non-slip silicone pad designed to securely rest a phone while laying upright against the power bank. The power bank surface doesn't have the same non-slip material as the charging stand but because it is rubberized, it is a still grippy so the phone won't slide off of it when placed horizontally on the power bank. 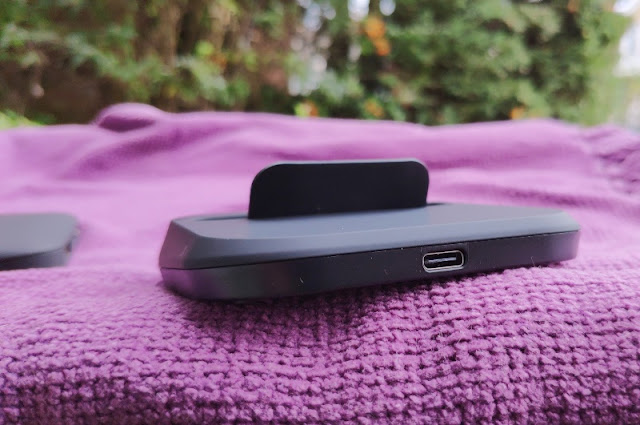 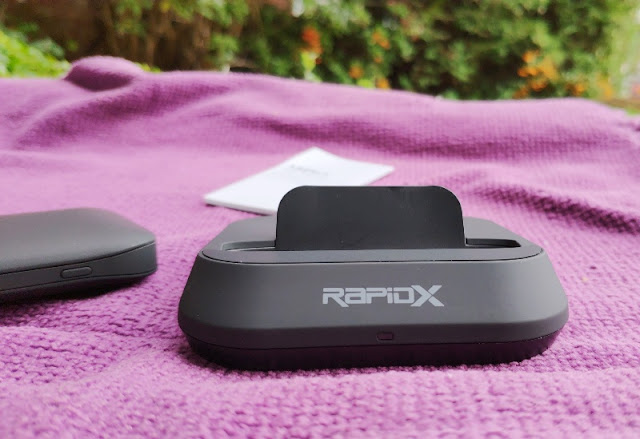 Safety-wise, the RapidX MyPort does feature smart circuitry that can detect and regulate the powerbank should over-voltage, over-heating and over-current occur.

MyPort's usb-c power delivery port is capable of fast input charge and fast output charge of 5V/3A, 9V/2A and 12V/1.5A (a maximum input and output charge of 18W). This means, you can use the usb-c port to also charge the power bank if you don't want to use the charging stand. 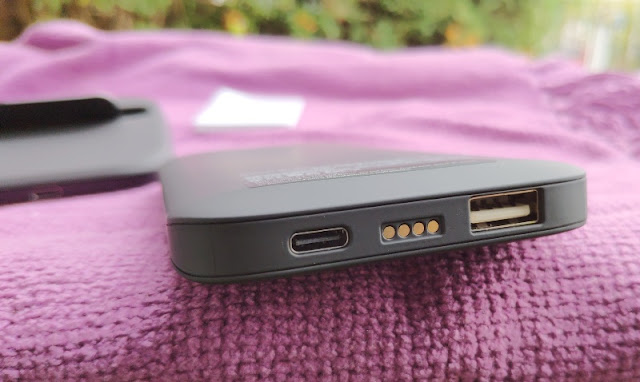 Next to the usb-c port, there are four circular gold-plated contacts (for the charging stand) and a fast charging usb-a port that can output 5V/3A and 9V/2A (18W). 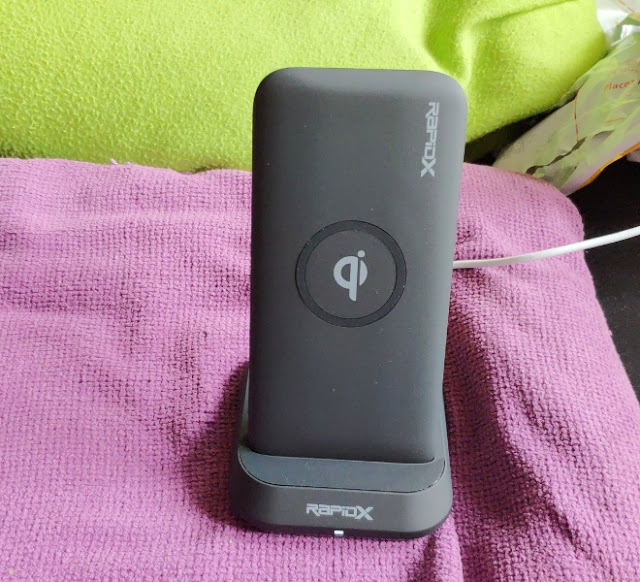 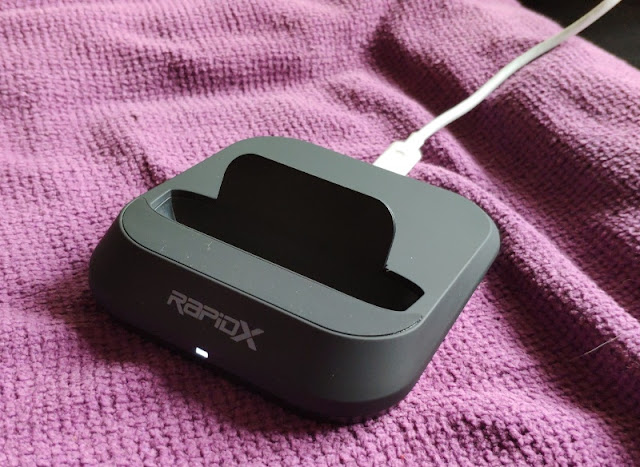 RapidX MyPort has, essentially, the same rectangular size of a smartphone so, it's just a case of simply placing it down longways. Bear in mind also that the placement and surface area of the charging coil on your smartphone is a factor. MyPort's charging coil has a 4cm diameter and it is located off-centre towards the the top, which should be a sweetspot for most qi-enabled wireless phones. 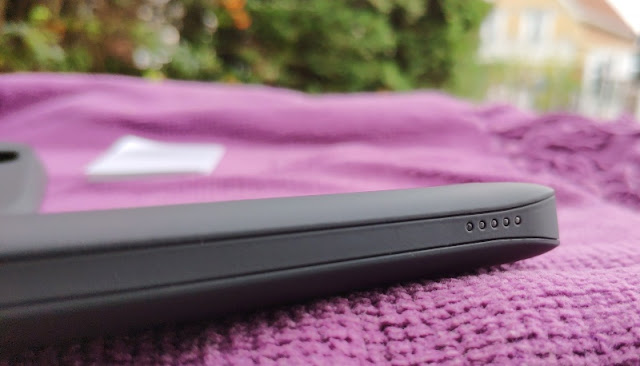 However, because RapidX MyPort only has one wireless charging coil, instead of two (one on top and one on the bottom), you cannot charge the phone wirelessly in landscape on the charging stand. Being able to place the phone horizontally on an upright charging stand is super handy especially when you are watching a movie while the phone is wirelessly charging. 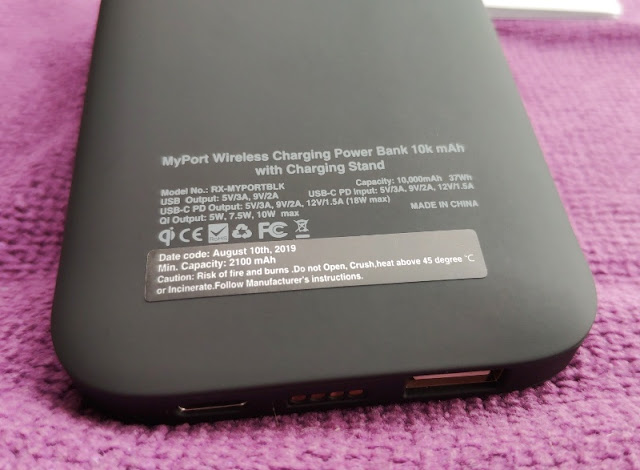 The button on the side of the power bank has dual functionality: to power on/off the wireless charging and to check how much battery there is left via the four small led lights located on the other side. 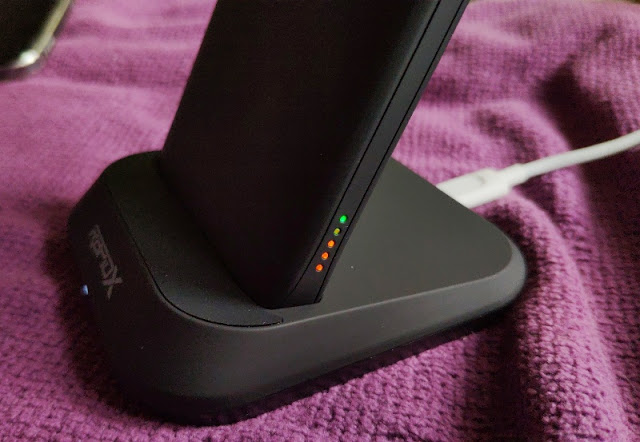 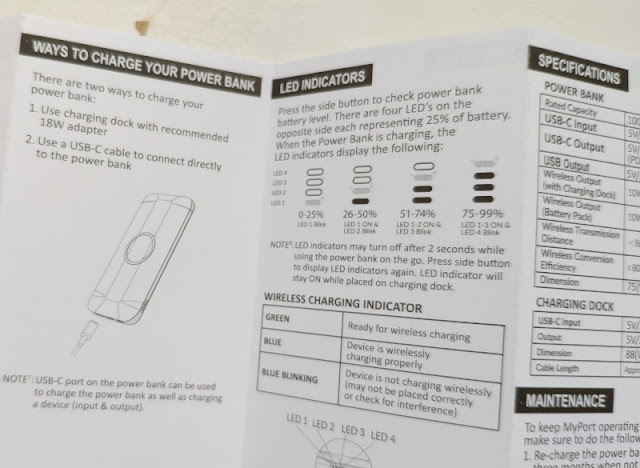 When removed from the charging stand, you cannot wireless charge and usb charge at the same time but you can use both usb-c and usb-a ports at the same time to charge two devices, which is convenient although charging speed is slower because the maximum 18W charging bandwidth that is available has to be shared between the two devices. 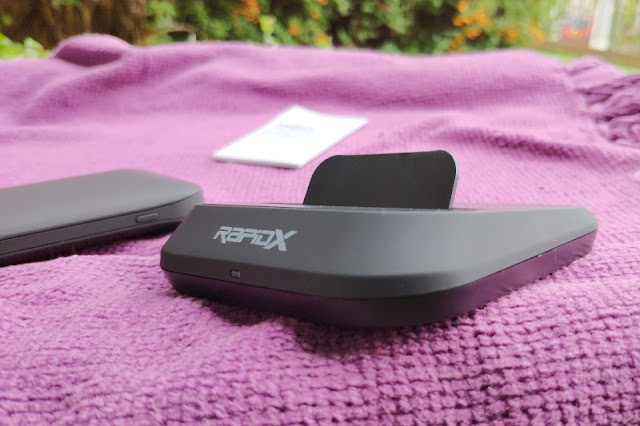 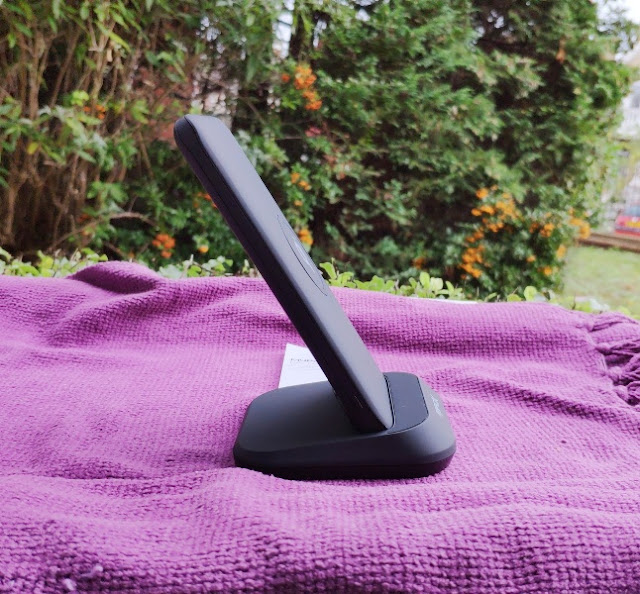 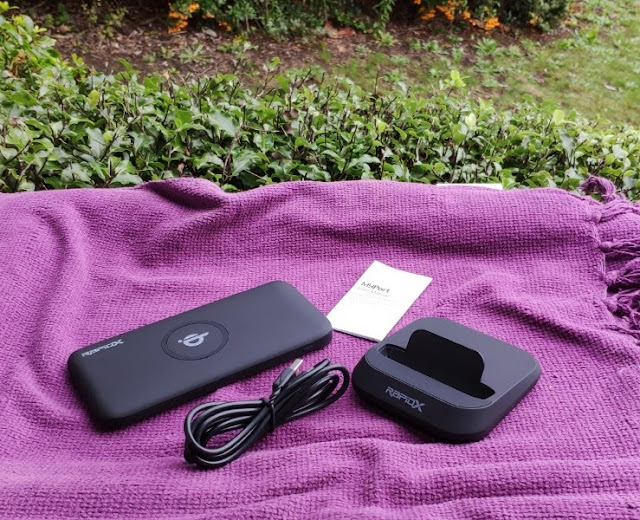 MyPort also comes with a usb-a to usb-c cable over 3ft long (100cm) along with a detailed user guide and 2-year limited warranty, 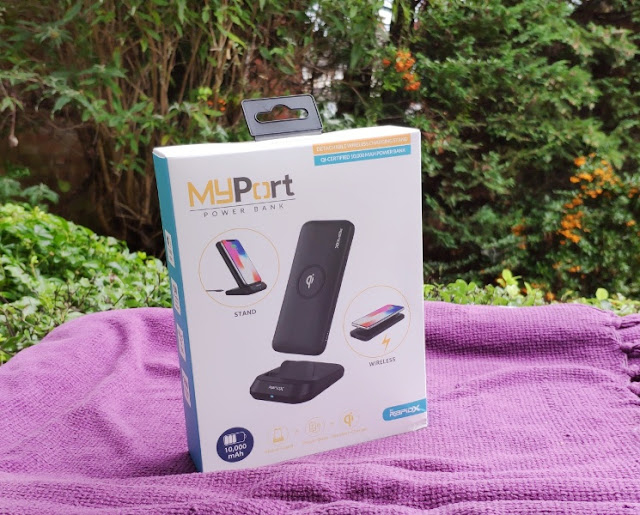